Tucked away in the furthest corner of the East Neuk of Fife is the seaside village of Crail. This part of the world is has more in common with Cornwall than other parts of the Scottish coastline. White washed cottages, cobbled streets rolling down to a picture perfect harbour, a rocky shoreline only smugglers would brave and of course some of the tastiest food that side of Edinburgh. 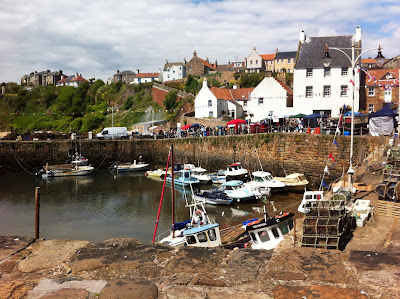 Now in its third year, the annual Crail Food Festival takes place in June and I headed up and over the bridge to Fife to enjoy some of the best of the region's produce. Organised by a loyal community of local volunteers, the festival takes place over a weekend. Because this is Scotland, the Saturday featured an indoor market with cookery and tasting area, followed by a fabulous dinner and music event in the evening, this year featuring a three course Fife menu with King Creosote and friends bringing the tunes (a sellout!) Then, on the Sunday, the festival takes its chances and sets up shop on the famous harbour, the most photographed in Scotland apparently! 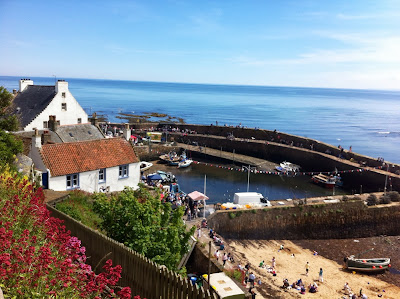 2013 must have seen some sun dances taken place, or perhaps a pact with the foodie gods as Crail basked in some of the best temperatures this year. Sadly unable to make a weekend of it and drove up only for the Sunday, but were rewarded by the journey nonetheless; inland or taking the coast road, it's spectacular. A worrying band of cloud stayed over the hills and the sea sparkled as far as the eye could see. 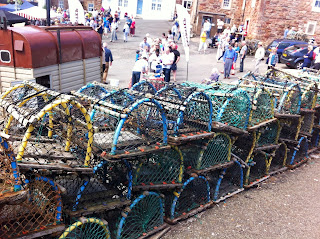 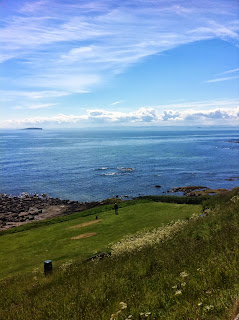 Set up as a celebration of local food and drink and a showcase for some of Fife's finest produce, the festival aims to encourage visitors to make the journey and enjoy all this in a fabulous setting. It had done the trick as the place was packed but luckily the trusty Micra was small enough to find a parking space. We joined the throngs of people walking down the pretty streets to the harbour. Approaching the harbour from the east is one of the best views from Scotland on a day like that. Blue, blue, blue and East Lothian visible in the distance.

On arrival at the harbour it had been transformed with stalls selling a diverse range of goodies including Arbroath Smokies, sweet waffles and chocolaty crepes, fresh pizza from an oven in the back of a horsebox (really) and pigeon on the menu from Wild Rover Foods. All this against a backdrop of boats, lobster pots, rambling cottages and the tangy air of the sea. Priorities, after the drive we needed sustenance so we headed to the lobster shack after seeing people walking past with their plates filled high with local crustacean. Cooked lobster with a squeeze of lemon juice and dressed crab ready to go we sat on the harbour wall and picked every scrap of juicy sweet meat out of it in the sun. 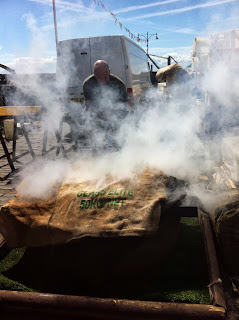 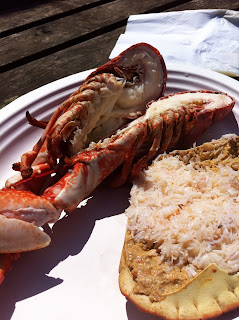 As well as the stalls along the harbour there were foraging walks from professional forager Galloway Wild Foods and the Fife Diet team who also brought their carbon-neutral smoothie bike! Continuing the emphasis on local food were Food from Fife who had a prime spot at the edge of the harbour wall with info, recipes and chef demos from Christopher Trotter, Paul Wedgewood, and Scott Davies. They also had some shellfish demos from local seafood expert Jim Knox who put a lobster through its paces. More on him soon on this blog! 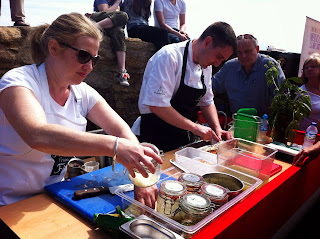 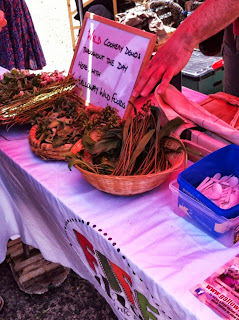 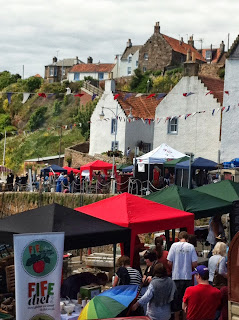 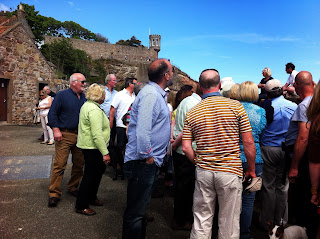 As part of the build up to the festival, myself and other food bloggers have been contributing to the Crail Food Festival blogging project with guest posts about the producers and people attending the festival. Mine was all about the Food from Fife initiative and the work they're doing in Fife. Read about that and the rest of the posts on the Crail Food Festival website here.

Back in the village, the shops and tearooms were open and we visited the butchers and the greengrocers, snapping up a punnet of the tiniest, sweetish local strawberries. Ostensibly for the week ahead, they barely made it back home! back at the harbour, there was just time to pick up a couple of goodies including incredible patisserie from Sucre Coeur, before we headed back up the road. 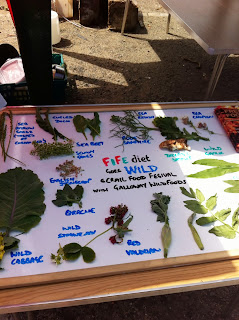 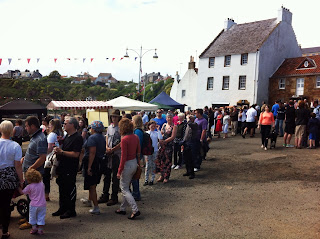 It was wonderful to see the harbour busy and buzzing, and to see so many people coming together to enjoy all this great food. It's also good to see a real community project come together and be a success; so many events now are corporate, sponsored and identikit, let's hope if the festival expands to meet demand it won't loose any of the charm and character that marks it out as a must see on the foodie calendar. 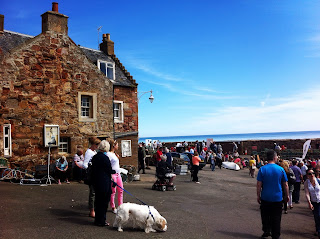